This article is brought to you by Andrej Kovacevic

More of Security
How to Secure Electronic Payments on Your Mobile DeviceBitdefender Internet Security: Rock-Solid Protection Without the Sticker ShockHow Private Are the Messaging Apps?How to Protect Yourself From New Scams During the PandemicThe Ultimate Guide for E-commerce Website Security in 2020 See more

2018 has come and gone with yet another batch of disconcerting reports of security breaches, data leaks and virus mutations that should leave the average PC user concerned for their devices and their safety. Staying ahead of personal data before it reaches unintended recipients means taking the time to study and understand various software options created for privacy’s sake, but it can seem a daunting task from an outsider’s perspective.

Yet understanding privacy and safety between your computer or mobile device and the world around you only requires a few steps. We’ll be breaking down our recommendations to just a few programs for various devices that are easily accessible with a little learning on the part of the end user. Keep in mind that no one piece of software will solve every problem, however, as installing anti-virus software doesn’t keep your data private and routing your connection through a virtual private network (VPN) doesn’t stop malware from creeping onto your devices. With that in mind, here’s some of our most often utilized software. 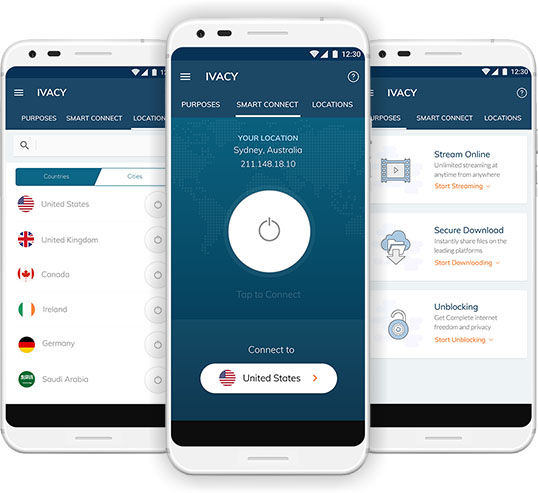 The core of good internet anonymity depends on running a virtual private network that essentially acts as a go-between that stands between your computer and the internet in an effort to disguise your internet traffic. VPN software essentially works by connecting you to a server which then forwards your traffic along with the traffic of other VPN users, making it appear as if the data is coming from a swarm of anonymous people rather than your easily traced IP address.

In order to be effective, a VPN provider needs to be secure, offer true anonymity, host multiple servers for better connection speeds and allow mobile devices to connect through your account. As such we recommend Ivacy, a service based out of Singapore that has operated for over a decade and continues to go on strong at every turn. At a price point that has reached as low as $60 USD for five years of service during its holiday sale, Ivacy’s strength and flexibility are difficult to beat.

With over 1,000 servers and dedicated apps for iPhone, Android, Xbox, Windows, Mac, Linux and browser extensions for several popular options, flexibility is definitely one of the company’s core concepts. You can use your Ivacy account across five separate devices instead of being tethered to just your PC or your phone. Staying private means keeping your data safe no matter what device is accessing it and your phone can be one of the most easily compromised systems you carry, especially considering how many public networks you’re likely to access while using it. Thankfully, Ivacy’s VPN offers public Wi-Fi protection.

Yet the most important factor of any VPN is ensuring they do not keep logs of who accessed their servers or from which address those access requests originated. Ivacy keeps no logs and its services are encrypted to make it harder to peek at your data. 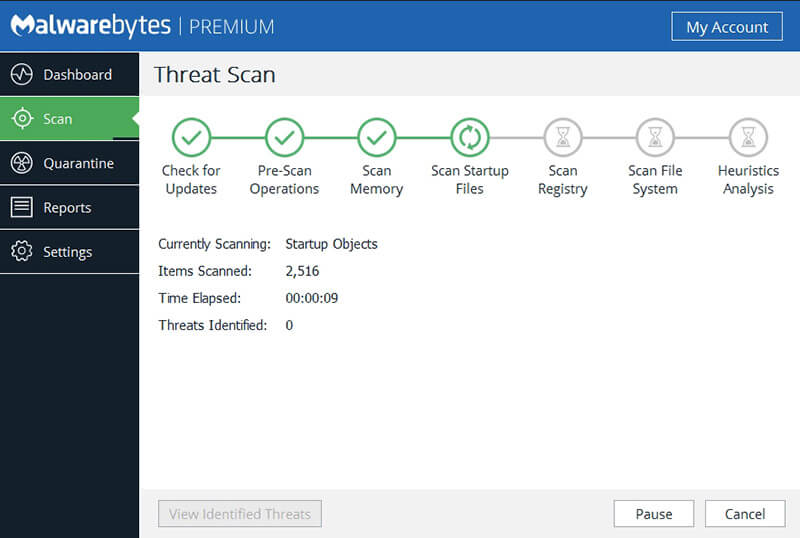 Keeping your digital fingerprint off of the internet at large is just the first step to staying safe. No privacy software can protect you if your machine has been compromised by malware, viruses or spyware. While each variant has its own quirks and methods of attacking your system, all three are capable of either hampering your PC’s performance, stealing your data or even ransoming data back to you after encrypting your hard drive. System security isn’t a matter to be taken lightly.

For general security needs, Malwarebytes has reigned supreme as the go-to response for virus and malware removal for the past several years. This crown is a heavy one, however, as the venerable software has reached a point where it seems a little too excited to prompt you to buy its premium services, but its free variant is a completely capable suite of anti-virus tools that sweep your drives for potential threats that you can then quarantine or delete appropriately. Best of all, they offer support for Windows, macOS, iPhone and Android devices accordingly. If you step up to their paid service you can monitor your devices in real time to stop attacks before they happen, too.

If you only use Windows devices, the built-in Windows Defender is a surprisingly robust tool that performs as well as many free options on the market without a huge impact on your system and its performance. If you’ve ever had the unpleasant experience of using a PC running the Norton suite of anti-virus tools, you know all too well how badly an antivirus program can choke the life out of a PC if it isn’t well designed. 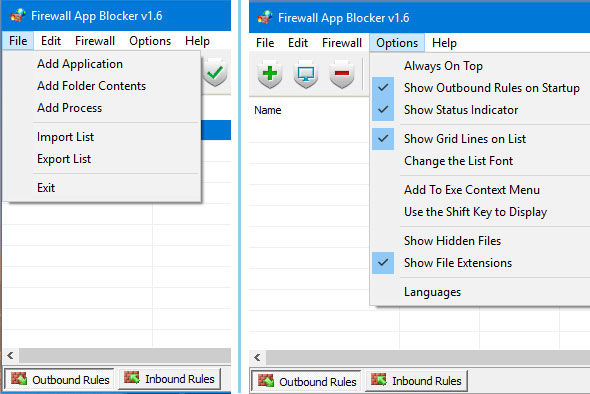 Firewall programs operate in a simple manner: If a connection into or out of your device doesn’t seem right, the firewall stops the connection. The technical explanation is obviously more nuanced, but its key function is to stop unwanted connections that could lead to breaches that introduce security vulnerabilities or data loss.

For Windows, the built-in firewall will handle most daily use applications without a problem, but you might consider stepping up to a program that can block on a program-by-program basis if you run many pieces of software that you suspect may not be as legitimate as they seem. For this purpose, Firewall App Blocker performs admirably. Blocking a program through the default Windows firewall takes several steps but Firewall App Blocker lets you drag and drop the offending program to disable its internet access immediately. It’s also not susceptible to attacks that target the Windows firewall specifically, making it a nice secondary layer for the security conscious.

Mac machines also come with a capable firewall of their own, yet many machines have the firewall turned off by default. If you want more fine-tuned control, Little Snitch actively watches for network traffic and alerts you when certain programs ask for internet access so you can make decisions in real time rather than guessing as to whether a program will try to reach out through the internet or not. If most of your communication happens through common email protocols or chat programs, chances are you’re not anywhere near as secure as you could be. Many chat protocols, especially older ones, depend on legacy software that isn’t updated as often as it should be. Switching to a chat client that offers proper security options makes a big difference in making sure the only people who see your messages are the people you send them to directly.

For this purpose, it’s difficult to recommend anything other than Wire. You can use safety plugins for other clients, but Wire was developed to be a secure multi-platform communication client that sports end-to-end encryption that makes it much more secure than many popular protocols. Wire supports text and video chat with the same levels of encryption and doesn’t require a phone number to register and it’s free for personal use, though there is a paid option for professional or corporate users. It’s also ad-free, which points to its dedication to security and anonymity.

While the dream of sending secure emails is a lovely one, understanding the vulnerabilities of email protocols is vital in moving towards more secure options. It’s tempting to stick with an older form of communication that has been widely adopted. Unfortunately, the security failings of email have been under scrutiny for years and even well-encrypted email messages can have incriminating metadata that may reveal information more revealing than the content of the email itself. If security is your concern, don’t rely on email as your primary form of communication. Should you find yourself unimpressed with security software options and fear the risk of losing access to your machine and also happen to have a bit of free time and a love for technology, virtualisation is one of the strongest safeguards you can put in place. Essentially, virtualisation programs allow you to run a virtual machine inside your computer that emulates an operating system in its own safe environment. If your VM is compromised, the computer running it is safe from infection as long as no files are transferred between them.

There are several options and each program tends to focus on emulating a certain type of machine. For instance, VirtualBox seeks to emulate Intel and AMD-based systems running Windows, Linux or even DOS if you should find yourself pining for the old days. One of its most useful boons is being able to emulate a Windows PC while running the VM software on your macOS or Linux device, meaning you can run Windows without having to use it every day yet you don’t lose out on flexibility in the suites of programs you have available to you. You can even install a virtual Android operating system if you’d like to test phone apps out without installing them on your physical phone.

Much like before, it is important to note that a VM isn’t a guarantee of safety. If you accidentally download a virus that can access your network, it can use that access from inside your virtual box to wreak havoc through even the most secure virtual machine. If you’re truly concerned about a program you intend to install, install it on a machine that has no internet access that you don’t use regularly. While an inconvenience, it may save you a lot of trouble and pain in the long run.

Keeping unwanted individuals from accessing your data takes a level of vigilance and care that many of us take for granted these days. It’s not exactly fun to set up a virtual machine just to keep a suspicious file from infecting our main computer, but taking the time necessary to protect your data before it gets out into the wild is many times easier than trying to play damage control after the fact. If you feel nervous about the websites you visit or think a program might harm your computer, don’t just act as you normally do. Take the time to investigate its origins and find out how dangerous it may actually be.

Above all, paying attention and working safely will save you from a headache nine times out of ten. For every other incident, you’ll thank yourself for setting up a VPN and not sending sensitive information through unencrypted email services. For further reading, check out our guide on surfing the web anonymously and stay safe above all else.

How to Protect Yourself From New Scams During the Pandemic

How Can You Improve Company Cybersecurity on a Tight Budget?

Have You Been Hacked? How to Find out if Your Accounts Have Been Breached