Share this guide
COPIED!
The tenth anniversary of Fallout 3 seems like it'll come and go without a word, and for good reason: Fallout 76 is on the horizon.

More of Gaming
Your Guide to Getting the Perfect Hardware for Gaming8 Tips to Become Better at Video Gaming5 Easy Ways to Start Earning Gold in Old School RuneScape5 Tips for Beginners in Escape from TarkovWhen Is Buying a Mid-range Gaming PC vs Building One a Better Choice? See more

The tenth anniversary of Fallout 3 seems like it’ll come and go without a word, and for good reason: Fallout 76 is on the horizon. Chances are you’ve heard of the original leak of the game’s survival-oriented focus several weeks ago, but it wasn’t until E3 rolled around that Bethesda officially announced an entry to the Fallout series that touts online-only gameplay with a focus on co-op and PvP elements in a world where precious few humans roam the countryside. Needless to say, it’s gotten both attention and ire despite being months away.

Separating rumour from fact is more important now than ever, so we’ve compiled all the available information we’ve found on Fallout 76 and why it’s shaping up to be a unique title in Bethesda’s library. In late May, Kotaku released information from three inside sources who denied the then-undescribed Fallout would be a remaster of a previous title or even a re-imagining of a New Vegas style game. Instead, the sources proposed it would be an online-oriented survival game in the vein of Rust or DayZ in which players would work together to overcome a harsh post-nuclear world.

E3 has since proved those sources to be correct: There is no offline component to Fallout 76 and it is indeed a multiplayer-only title. Reportedly, this title came about as a prototyped version of Fallout 4 to mock up what the series might look like if multiplayer were to be introduced. As such the game has gone through several evolutions in scope and scale, including changes to core gameplay components.

A central component unsurprisingly lies in the series’ new respect for base building, a feature that returns from the fourth instalment. Players can reportedly build bases nearly anywhere by plopping down a mobile camp creation tool given the rather obvious acronym of C.A.M.P. and decorating much like the fourth game allows.

You won’t be tending to your base building or resource gathering alone, however, as Fallout 76 will be hosted on servers that Todd Howard, director of Bethesda Studios, stated will contain “dozens, not hundreds” of other players, presumably to encourage a more community-oriented feel. Fallout thrives on a world that feels appropriately downtrodden as it struggles to recover from total thermonuclear war and the decision to limit player counts on servers makes sense; Games like World of Warcraft often fail to convey the feeling of being a lone hero when faced with thousands of other player avatars occupying a similar space.

Your friends won’t be the only people joining you, though.

Bethesda’s foray into player versus player 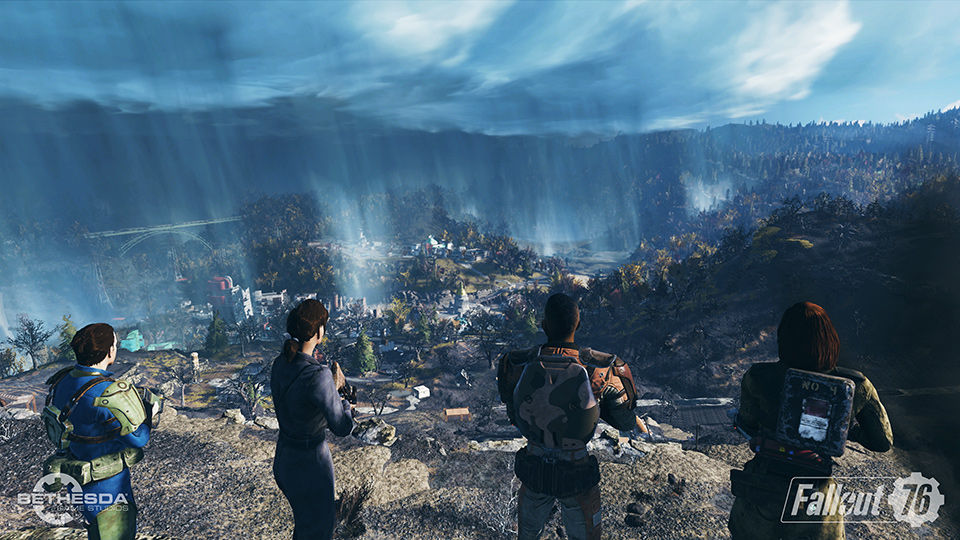 Those looking for a traditional RPG experience will likely come away from 76 feeling disappointed. E3’s showing promoted how this entry will focus on nothing but player characters and Todd Howard followed up later in a lengthier interview by clarifying how the world will contain no NPCs besides companion robots. Though the game’s trailers show hostile monsters and mutants, no sentient humanoid enemies or friendly quest givers have been shown as of yet.

As the base building trailer so cheerily states, “some of your fellow survivors may not be neighbourly,” followed by a short clip of two player characters engaging in a short firefight. Instead of NPC bandits, human players will represent the rogue element in the wastes of the Fallout world, though no concrete information on how PvP combat will unfold has been released. Again, Howard has stated the player combat system is being regularly tweaked to combat griefers, which is vital in a game where player characters are capable of sourcing nuclear weapons.

Another short, jaunty clip shows a group of players hunting down information to secure active nuclear weapons that can then be deployed on the overworld map at will. While the trailer focuses on using nukes to destroy areas for the sake of scavenging new materials and fighting heavily mutated monsters, the implications of players sending nukes into the encampments of other players does raise flags about how fair and fun that aspect may grow to be. 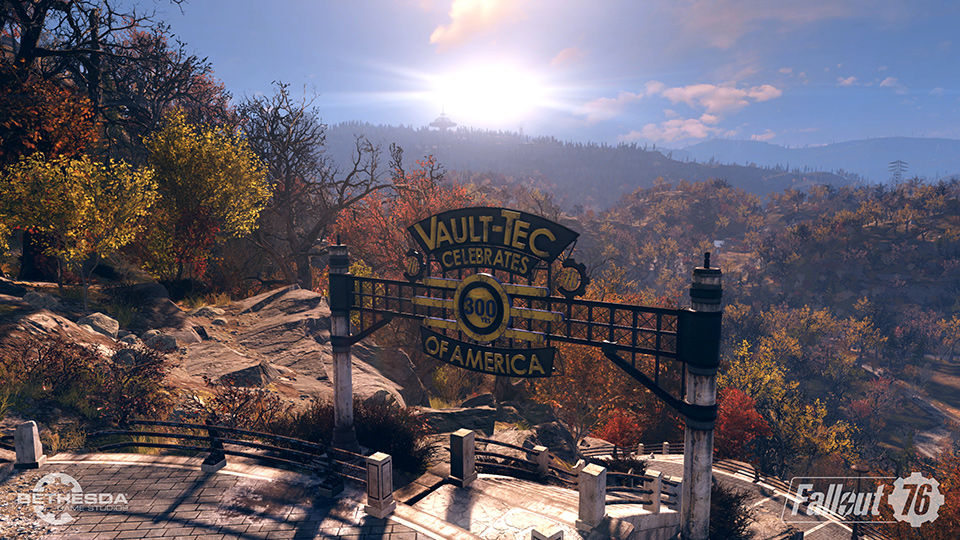 While online servers are slated to be public at launch, private servers have been proposed by Howard in his interview and player progress is not tied to any specific server. The character you play as will progress no matter what server you wind up on, suggesting you can play with your friends on a private server once they are released and then take that same character to public lands should you want to test the waters before diving into an open game session.

Granted, the presentation did present solo play as an option, but it was reiterated that group play would make it easier to progress and gain strength; This solo play still assumes you’ll be seeing other players, too, just without being forced to join forces with them. Additionally, there are no plans to include an offline mode, which means Fallout 76 will require a constant internet connection. No platforms have been officially announced, though Amazon pre-order information lists the Xbox One, PlayStation 4 and PC as launch platforms.

Story details are still thin, with the current known setup being that your character is a member of Vault 76, foraying out into the world a mere 20 years after the nuclear war that destroyed the world. For comparison, Fallout 4 is set roughly 200 years post-apocalypse and many visual shots of the game have shown fairly vibrant wildlife and greenery in the hills of West Virginia. While quests and a storyline are promised, those details still remain a mystery. 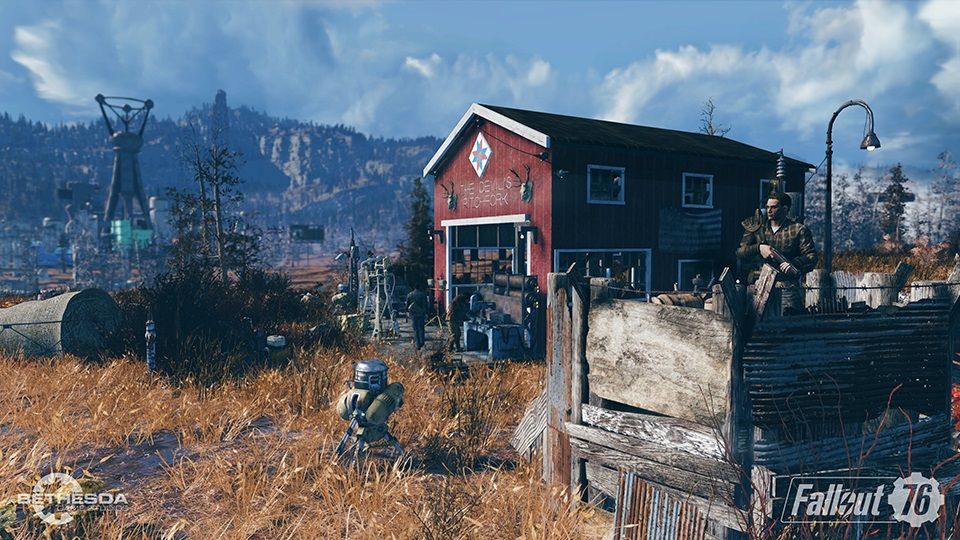 With a release date of November 14th and at least one confirmed beta with an unknown date, it won’t be much of a wait before those details start to unfold. Though the beta remains in limbo it’s safe to assume it will take place around three weeks to a month before the official release, so expect an October date to crop up as the launch day approaches.

Will Fallout 76 live up to a long and illustrious line of RPGs? It’s hard to say, considering the game seems to put survival and team play over a traditional roleplaying experience, but it’ll certainly be interesting to see where Bethesda takes the series from this point forward.