Guides to help you get better at technology
We do our best to stay on top of the latest in tech so that you don’t have to search the entire internet for what you are looking for.
iOS

Total Makeover: iPhone 8 Expected to Have a New Design

More of iOS
What Can You Expect From the Apple Event?iOS 12’s Public Beta: Availability, News and UpdatesA Comprehensive iPhone X Review That Helps You Decide Whether to Buy OneiOS 11 Beta: Updates, Improvements, and What to ExpectIs this the iPhone 8? Leaked Blueprints Reveal Closer Look at Apple’s Latest Creation See more

Its closest rivals have already released their latest flagship smartphones – Samsung Galaxy S8 and LG G6. The stakes have been raised higher, and consumers are eagerly waiting to see what Apple will release. According to leaked reports and images, fans of the iPhone brand should brace themselves for a series of surprises. This is because iPhone 8 will have a different look. The phone is expected to come in a brand new design which will not only make it stand out from the rest of its rivals but will also differentiate itself from the family of other iPhones that came before it.

One area which the designers of the phone looked at is the screen to body ratio. Thanks to this ratio, the phone will have an edge to edge glass display. Some sources say that Apple aimed to outdo Samsung Galaxy S’s screen to body ratio. With such as expansive display area, you should expect some changes on the front surface of the phone. The first casualty that bore the brunt of the anticipated new design is the home button. iPhone 8 will not have its signature home button that is usually positioned right at the lower end of the phone’s display area. What remains to be seen is whether these changes will give birth to new amazing features. 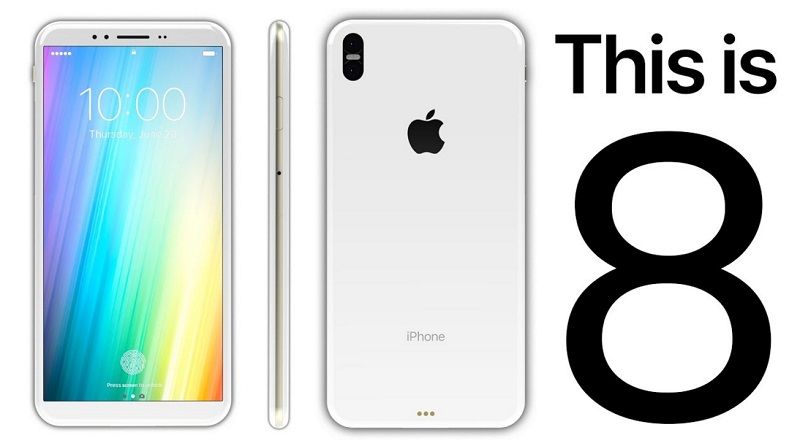 One of the key things that Apple has been trying to achieve is to include the Touch ID fingerprint sensor on the display area. We are sure that this feature will be in iPhone 8, but the mystery that is yet to be uncovered is the location of the feature. Will the exit of the home button pave the way for the Touch ID fingerprint scanner? If this rumour carries some weight, then the sensor is expected to be at the bottom of the display area. Other sources claim that the sensor will be at the back of the phone. We hope that it will not be embedded at the back since it will give users a hard time.

It is rumoured that iPhone 8 will come in a different body. Some sources suggest that Apple is saying goodbye to its iconic aluminum body which it has been using and is going for some years. The company may be going for a glass-laden body. The last time a product from Apple that had elements of glass on its body was iPhone 4S. If the rumour turns out to be true, then you should expect to feel heavy presence of glass on iPhone 8. Although glass seems to be fragile, you shouldn’t be worried because the advancement of technology has resulted in stronger glasses that can withstand any force. The strength and sturdiness of iPhone 8’s glass body are expected to be boosted by the phone’s stainless frame.

With the new design, iPhone 8 is expected to have a comparatively bigger display area than the other iPhones. Some rumours have suggested that the phone will come in both the 4.7-inch and a larger model of 5.5-inch. Unconfirmed reports suggest that iPhone 8 will be unveiled in the month of September and released in October. Meanwhile, we can live with the latest leaks.