This article is brought to you by Bitdefender

More of Security
Anonymity in the 21 Century: Why It’s So ImportantTips on How to Identify a Scammer on the Phone and Avoid HimHow to Secure Your Work-From-Home Setup Against Common CyberthreatsHow Can Your Company Develop a Great Cybersecurity Strategy?What Should You Look Out for When Choosing a VPN in 2022? See more

With each passing year, the security situation on the internet continues to deteriorate. Users all around the world have to face myriad threats, ranging from identity thieves to ransomware scammers and everything in between. That makes having top-of-the-line security protection on all of their personal computers essential.

But with so many internet security products to choose from, it’s not always easy for the average computer user to choose the best one. For that reason, plenty of people end up going with the first free antivirus solution they come across – often with disastrous consequences.

That happens because most common antivirus solutions only work to protect a PC from malicious software. They do nothing to handle threats like phishing emails, man-in-the-middle attacks, and browser-based snooping. To get that level of protection, comprehensive internet security software is required.

Today, I’ll be looking at just such a solution. So, without further ado, here’s a comprehensive review of Bitdefender Internet Security. We’ll cover what kinds of protection it offers, what it does well, and where I found it lacking. And in the end, you should have a pretty good idea about how well it might meet your security needs. 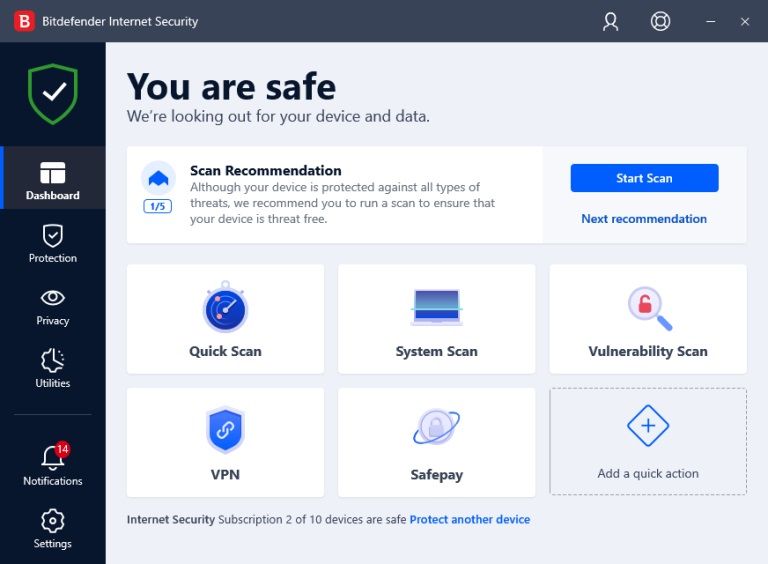 If you’ve ever heard of Bitdefender before, there’s a good chance the product you’re most familiar with is their flagship antivirus product. While that’s a powerful piece of software in its own right, the Bitdefender Internet Security suite takes its core protections and improves on them in several key ways.

Those improvements come in the form of some additional features that are well worth the price of admission. The most important of those features are:

Important:
If you’re hoping to use Bitdefender’s Antispam features, be aware that it only works when you’re using a mail client like Microsoft Outlook or Thunderbird, and then only when you’re connecting via POP3/SMTP. That excludes a great many common mail providers’ default setups, so your mileage may vary.

Based on those features alone, you might guess your PC would be well protected with Bitdefender Internet Security installed. And you’d be right. But that’s not all that the software brings to the party.

On top of the major features mentioned above, Bitdefender Internet Security also comes with some other useful features and tools that help keep your PC safe and running trouble-free. There’s so many of them in fact that they’re too numerous to cover in great detail. But here’s a bit of information about the best parts of the package:

One of the tricky things about PC security is that there are simply too many vulnerabilities for a user to consider at once. That’s what Bitdefender’s Autopilot feature does for you. It keeps track of your habits and usage patterns and makes recommendations on how you can better protect yourself online.

With so many layers of protection working at once, you might expect that Bitdefender Internet Security would be a major resource-hog on your PC. But the included Bitdefender Photon feature monitors your system’s resources and adapts the software’s behaviour to keep your PC operating as well as possible.

Note:
In my testing, I found that the Photon feature did a credible job of keeping the software transparent from a user experience point of view. But I wouldn’t expect to have the same experience on a low-resource PC. So, if you’re running it on a low-end Windows laptop, expect it to make a noticeable dent in performance, much like any other security software would. These days, it’s disturbingly common for hackers to target users’ built-in microphones and webcams to try and gather data about you. It’s such a threat that even Facebook boss Mark Zuckerberg admits to placing a bit of tape over his webcam to protect himself. Well, Bitdefender has a better idea. Their software monitors any process accessing your PC’s hardware to look for unauthorized use of its webcam and microphone hardware. That’s a much better approach – no fumbling with tape required.

If you have children in your home, keeping them safe online is an even harder task than keeping yourself safe. After all, you can’t expect that they’ll always exercise good judgment online. But Bitdefender does make your efforts a little easier with built-in parental controls that filter out harmful and objectionable content for any user accounts you designate.

The feature contains quite a bit of granular controls, too, so you can be as permissive or restrictive as you like. You can also log in to your Bitdefender account from anywhere to change your settings, see what websites your kids are visiting, and set time limits as you see fit.

You can even use the feature to control access on Android and iOS devices, but the protection is a little lax because of those operating systems’ restrictions on permissions. But you can use it to locate your child’s device to keep track of where they are and where they’re going throughout the day.

Important:
It’s worth pointing out that the Bitdefender web browser controls only work with Chrome, Firefox, and Opera. If you have any other browser installed on your PC, your kids may be able to evade the website restrictions you’re trying to enforce.

Unless you’ve been living under a rock, you’re no doubt already familiar with some of the many consumer VPN services that have proliferated in recent years. But for most users, keeping a VPN running at all times is overkill. The good news is that Bitdefender Internet Security comes with its own VPN service that offers protection for up to 200mb of traffic per device per day. That’s enough for checking your email or getting a little work done at a coffee shop now and then. So, if you don’t take your PC on the road that much, it’s a perfect fit.

Note:
Even though most users believe that a VPN will give them some measure of identity protection while they use the internet, it really only keeps anyone from seeing the contents of their internet traffic. Because there are far easier ways for the bad guys to get enough of your information to do grievous damage to your financial standing, using a full-featured online privacy service is a much better option.

Even though Bitdefender Internet Security is feature-rich, it wouldn’t matter much if it didn’t live up to its lofty promises of safety and security. In my (admittedly limited) testing, I found that the software did a near-perfect job of keeping me from wandering into any dangerous sites or installing any dodgy software that might have posed a risk to my PC. But fortunately, you don’t have to take my word for it.

Bitdefender Internet Security also scored remarkably well among the major antivirus testing laboratories. It was named the 2019 Product of the Year by AV-Comparatives and is still maintaining an excellent ongoing rating from there. It was also named TechRadar’s Editor’s Choice in September, so it’s still second to none at the time of this writing.

One of the things that deter users from getting advanced security products on their PCs in the first place is the price. It’s not uncommon for big, well-known vendors like Norton to offer yearly subscriptions to their comparable products for £80 or more – and that’s enough to leave a major dent in your budget.

On that front, though, Bitdefender isn’t as bad as you might think. The current pricing scheme for Bitdefender Internet Security is as follows:

Important:
The Bitdefender Internet Security product only offers protection for Windows devices (except to enforce parental controls on Android and iOS devices). So if you need to protect more than just Windows PCs, you’re out of luck unless you upgrade to Bitdefender Total Security.

The Wrap-Up: Pros and Cons

The bottom line here is that Bitdefender Internet Security has quite a bit going for it. It has a rich feature set, scores well on antivirus and antimalware tests, and comes with enough bells and whistles to cover most users’ security needs. But to sum up the product, its pros and cons are as follows:

As far as internet security products go, Bitdefender Internet Security is an excellent option at a fair price. It’s not perfect, mostly because it only works with Windows systems – and really, who’s only using Windows these days? But on balance, it beats every free antivirus solution by far and gives you more than enough protection to defeat the vast majority of common web threats. So, in short, it works as advertised. And that’s high praise in a world where so many products overpromise and underdeliver.

Bitdefender
Bitdefender is a global cybersecurity leader protecting over 500 million systems in more than 150 countries.