Share this guide
COPIED!
Overall, Divinity: Original Sin 2 is a fantastic game but there are still points to keep in mind if you aren't used to games of its ilk.

Back in 2013, the publisher Larian Studios pitched a Kickstarter campaign for Divinity: Original Sin, slated to become the sixth entry in the developer’s long-running Divinity franchise of role-playing games. With nearly $1 million in private donations, the game’s funding went above and beyond the requested amount of $400 thousand and reached nearly every stretch goal the company set.

This success continued after the game’s release as it garnished a respectable 87 on Metacritic. By the time 2015 came around and only a year post-release for its predecessor, Divinity: Original Sin 2 showed up on Kickstarter with a slightly loftier goal of $500 thousand.

For those of you with a love for PC RPGs, this is doubtlessly all old news. Original Sin 2 raised over $2 million and smashed through every stretch goal set for it, leading to a healthy development cycle that saw the game’s release in September of 2017. With several months under its belt and quite a few weeks to allow patches, fixes and initial hype to wear away, taking a look at the game in its current state leads to more questions than ever before.

Is it worth the title of Divinity’s namesake? Has it surpassed its predecessor? Have Larian Studios delivered on their promises?

Answering those questions might take more than a brief blurb that fits nicely on a game’s Steam page and is worth taking the time to compare the sequel to what came before it.

The Basics of Divinity 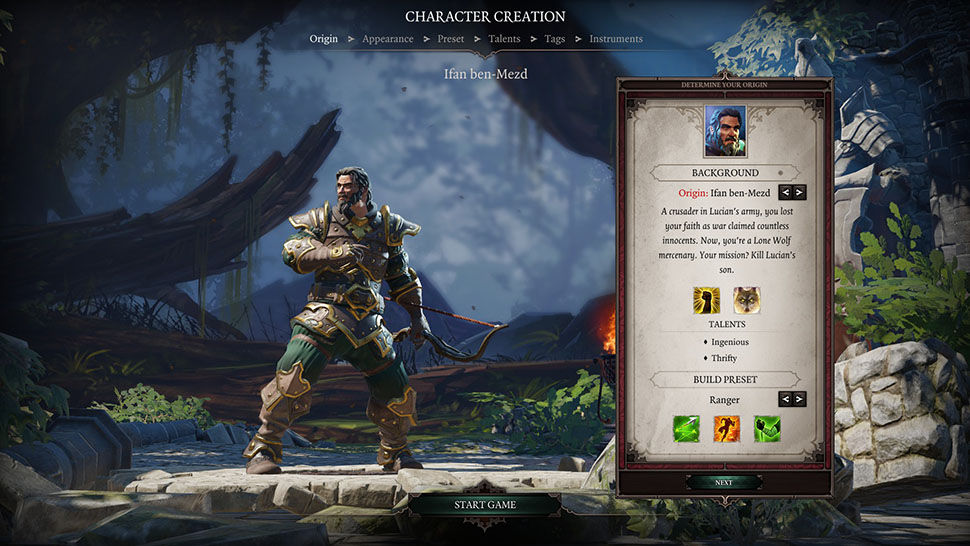 At its core, Divinity: Original Sin 2 is an isometric role-playing game in which your journey starts with a character creation screen for your main character. Along the way, you’ll be given the opportunity to recruit interesting characters into your party, take on optional sidequests, customise your character’s abilities as you see fit and so on. In a nutshell, it’s easy to wonder just what makes Original Sin 2 such an important entry into the world of role-playing games.

Those familiar with earlier isometric RPGs in the vein of Dungeon Siege or Baldur’s Gate will have a fairly easy time sliding into the basic knowledge necessary to navigate the game’s interface and manoeuvre your character, but combat is handled in a turn-based fashion with your party and your opponents each taking separate actions on their own time.

This turn-based approach won most of the praise Divinity: Original Sin received back in 2014 and that system has returned to Original Sin 2. Non-combat runs in real time but combat sections let you take your time and plot out your approach which is much more vital than the previous entry to the series. In the last game, opening up combat with a salvo of your most powerful abilities let you steamroll through almost any encounter without breaking a sweat. In order to address this, the general approach to a proper combat encounter has been overhauled significantly. Instead of being powerful through sheer overwhelming force, using cunning tactics and combining manoeuvres to put your enemies at a disadvantage is nearly required to make it through the main campaign, undercutting the occasional feeling of a power-fantasy trip the original could impart upon you.

The addition of an armour system to shake up enemy resistances and weaknesses means no one approach will work in every fight; You may have to ensure certain enemies can be doused in water and hit with an electricity-based attack in one fight, while the next requires your physical fighters to soften up a target with tactical moves before unleashing raw damage to finish the encounter.

Those who played the first game shouldn’t feel too out of place, however, as the changes made require more of a tactics-based overhaul to your combat approach rather than requiring you to learn an entirely new combat system from the ground up. This is in part due to the fact that the strongest skills now use source magic and can only be cast if you have enough source action points. Calling Divinity’s approach to graphics pragmatic may sound cruel, but there’s a simple elegance in a visual style that is gently stylised without hitting a cell-shaded look in the vein of Borderlands or Wind Waker that still allows a game to stay graphically relevant beyond the year of its release. It may be a little too early to tell as of yet, but Original Sin 2’s style has elements of 80s cartoons and modern 3D game design combined into a refreshingly pleasant experience that is plainly pleasant to behold.

It’d be downright criminal not to mention the game’s soundtrack, considering how the first game had to include a stretch goal to get an orchestrated score in the first place. Divinity: Original Sin 2 follows in its predecessor’s footsteps and its score is absolutely gorgeous. The mood rises and falls across the expanse of the game world with music that highlights influences from traditionally epic orchestrated pieces to tense acoustic mood-setters and quiet atmospheric soundscapes. In a word, it’s beautiful.

The real star of the show beyond the presentation is the core of the role-playing elements. In a world where games like Fallout 4 have turned player choice into the illusion of lasting impact on a game world, Original Sin 2 invites you to throw preconceived notions out the window and shape the game world as you see fit. While this has its own host of problems the effect is easy to appreciate and smaller complaints can be dismissed.

No two problems have to be approached in the same way and those choices will come back to haunt you in your playthrough. Early interactions with NPCs can be handled traditionally but should you be forced to steal from a character or, worse yet, kill them, you might find their absence suddenly highlighted several chapters down the line when you least expect it. Quests can be completed with the mindset of an outright murder hobo or a diplomatically-minded socialite.

Your character’s stats matter. The composition of your party matters. How you interact with an NPC the first time you meet them matters. For once, consequences feel weighty and solid in a way Mass Effect 3 could never have hoped to deliver, yet that can lead to some of the game’s few issues that require their own section of discussion. 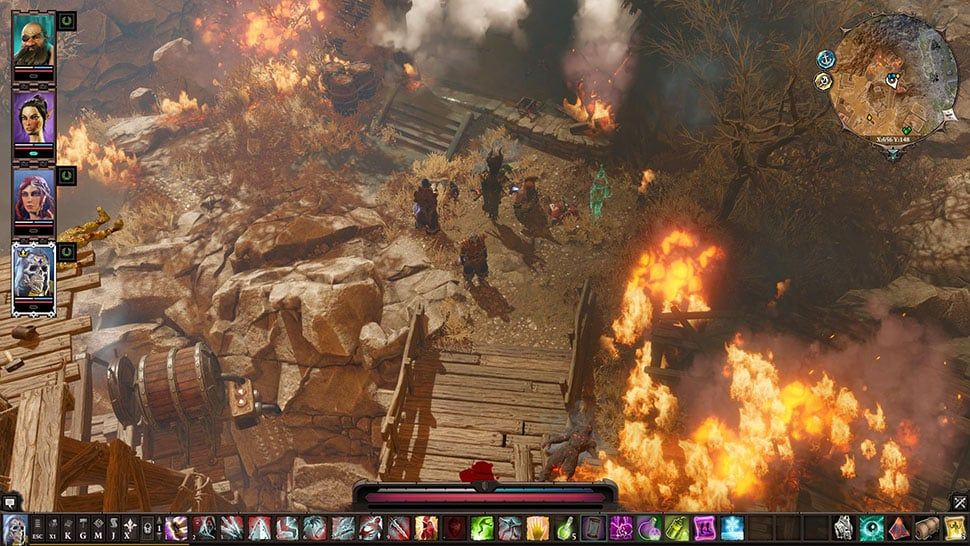 The greatest boon the game has just might be the multiplayer, conjuring up a strong sense of actually playing a tabletop RPG, not unlike Dungeons and Dragons which Divinity clearly draws inspiration from. It’s high fantasy in the best of ways and going through an adventure with a friend brings in conflicting views on quests and strange tactical combat you may not have considered on your own. Fighting together might last mere minutes, but you could conceivably spend hours pre-battle working through your strategy without noticing the passage of time.

If that’s not enough, the game master mode allows you to turn the experience into a guided walk through whatever story you feel like creating. With dice rolling mechanics, scripting capabilities and the game engine’s creation tools at your disposal, you can go beyond hearkening back to the days of tabletop games and bring that experience into a digital realm where you can guide your friends through any tale you’ve got bubbling in the back of your brain.

The Downfalls of Divinity Overall, Original Sin 2 is a fantastic game but there are still points to keep in mind if you aren’t used to games of its ilk. For starters, it doesn’t hold your hand. Original Sin 2 is difficult and requires a careful approach to many of the game’s encounters. Rushing in blindly or with a poorly-optimised party might lead to your untimely demise. If you don’t juggle around party members’ abilities you might hit a difficulty spike you weren’t prepared for, but the game does allow you to alter your starting character with the exception of their race should you realise you’ve made poor decisions.

When it comes to the story, having a mixed reaction is probably the healthiest kind to have. Almost every character you come across is voiced and sidequests may stick to you better than the game’s main story, which is fairly simple fantasy fare with the expected gamut of tropes and stereotypes within, yet still manages to pull a few surprising twists on you throughout. Nothing can quite compare to an odd quest involving transmogrified sentient beings and livestock, though. The story focuses heavily on the player character and that results in some of the less important players feeling more easily forgettable or even expendable, but your companions all react to the world and the characters within it in ways you might not be able to, adding weight the story otherwise lacks. The replayability this offers, along with the game’s allowance for different approaches, could be why the story feels so hands-off in many sections. That’s to be expected, however, and it never quite hits the point where you feel your decisions are being boiled down to a change in the colour of an explosion at the end of a hundred hour-plus experience.

With modding tools already available to sort out woes you have with the base game and add content to flesh out what you might think is missing, it’s only a matter of time until most of these complaints are addressed.

A Triumphant Return to RPG Form In case you’re on the fence, Divinity: Original Sin 2 is a fantastic game, no two ways about it. The world is engaging, the RPG mechanics are solid and actually weigh your skills and approach to problem-solving in ways other games cannot, and the combat is deeply tactical without feeling like you’ve started up a war game simulator from the early 90s. It’s a love letter to a time when a role-playing game expected you to enter a world created for you to alter in wild and unexpected ways with a character of your own invention and this shines through first and foremost despite a few small shortcomings that any open-ended adventure can be accused of.

Destiny 2: Launch Details and What to Expect