Guides to help you get better at technology
We do our best to stay on top of the latest in tech so that you don’t have to search the entire internet for what you are looking for.
TechLootNewsUnwinding the Mystery of Google’s Fuchsia OS

Share this guide
COPIED!
It's time to learn to multitask and look into exactly what Google Fuchsia holds for the future and what it could mean for the tech giant that never sleeps.

2016 was a hectic and strange year for a lot of us. If you overlooked the initial reports of Google working on their mysterious OS, you’re excused for having your attention elsewhere. With 2018 shaping up to be just as strange, it may be time to learn to multitask and look into exactly what Google Fuchsia holds for the future and what it could mean for the tech giant that never sleeps.

Stepping into the Microsoft playbook

Having taken a page out of Microsoft’s design schematics for unifying multiple operating systems across various types of devices, Google seems to be working to produce an OS that adapts to the platform it runs on with a unifying architecture or kernel for the easy transmission of data between various devices. In other words, instead of moving information from your Android phone to Windows architecture through third-party means, Fuchsia should act as a bridge between devices natively.

These features aren’t new in the world of technology and syncing is becoming a feature that is hard to overlook now that a digital life can bounce between two devices or as many as dozens if one’s home is integrated into a smart network, requiring management of far too many profiles, options, reports and bits of data across apps that may not be cross-compatible.

While most early reports seem to point towards Fuchsia outright replacing Android for mobile devices, others aren’t convinced that it will go as far as replacing Chrome OS, let alone stand as its own phone OS. At the moment your best option for previewing the OS is on a Pixelbook, which otherwise operates as a Chrome OS device, which may take some of the air out of a nay-saying prediction. It’d be difficult to imagine launching a platform-unifying OS only for Google to cut out its own devices as potential hosts.

Hosting an interface that draws heavily from mobile device development ideals in the same way Microsoft has promoted UIs that more easily transfer between portable and non-portable devices, Fuchsia seems to be taking a very Windows-esque approach to program management. In an interesting sign of divergence, Fuchsia seems focused on two specific UIs depending on whether it runs on a portable device or full laptop PC, while Windows 10 scales its UI depending on the device it is installed on, which could take us back to the convenience of a Windows 7-style PC desktop without sacrificing the ability to transfer information back to phones with ease. 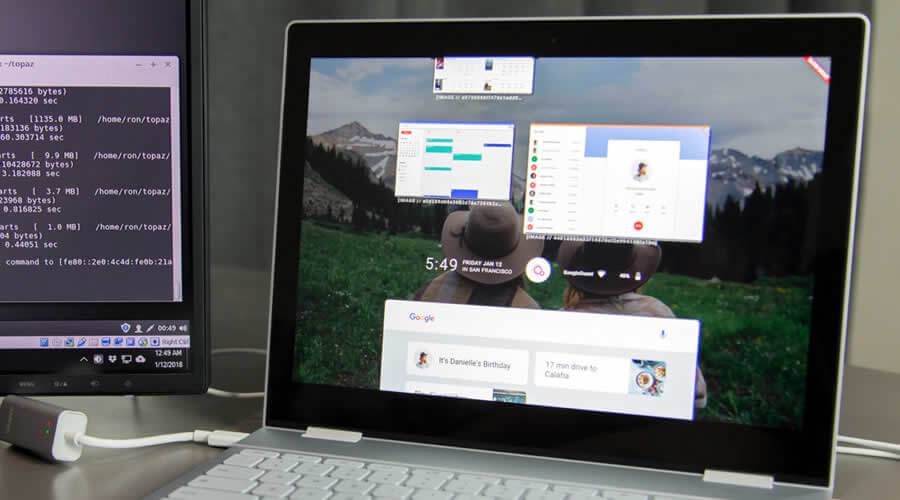 With Windows 10 barely out of the public eye after a prolonged roasting session over its telemetries design, one has to wonder how Google Fuchsia will put its users’ data to use. After all, plans to integrate Google Assistant and rely on it heavily for searches is just the earliest flag for data storage for which Google has a strong history of supporting.

While it may not reach the level of paranoia that inspired sites like Google World Domination, now seems like as good a time as any to think about the ramifications of handing over even more of our digital lives to various companies. Facebook’s recent scandals are just another part of a larger picture where our data is truly leaving our hands no matter what we might try to do to stop it.

Will it be worth the change? Possibly, possibly not. While a new OS certainly qualifies as yet another exciting smartphone development it’s highly unlikely we’ll see a full release of Fuchsia until 2019.