PlayerUnknown’s Battlegrounds and the Power of Popularity

Share this guide
COPIED!
PlayerUnknown's Battlegrounds has managed to strike a chord with the gaming public in a way very few other games have. It's not without its flaws and criticisms, but its mark on popular culture already seems inevitable.

More of Gaming
Step-by-Step Guide to Downloading PUBG Mobile Global Version APK and OBB 2020Microsoft Flight Simulator is Back in The Skies: All You Need to Know about the 2020 Game SeriesMac vs. PC: Which Is Better for Gaming?Liquid Cooling Systems for Gaming Machines: A Guide to Overclocking and Keeping Things CoolHow To Become a Game Streamer – Complete Guide See more

PlayerUnknown’s Battlegrounds, colloquially known as PUBG, is the latest entry in a short list of game mods that have transcended their humble beginnings to become full-fledged games and achieve some measurable level of financial and popular success. Following in the footsteps of League of Legends and to a lesser extent Day Z, PlayerUnknown’s Battlegrounds has managed to strike a chord with the gaming public in a way very few other games have. It’s not without its flaws and criticisms, but its mark on popular culture already seems inevitable.

The man behind the game

Brendan Greene isn’t the kind of person you might expect to be at the forefront of one of the most popular games in the world. He’s an artist and graphic designer who spent a good chunk of his life bouncing around the globe and only recently tried his hand at designing games, an experience which he chalks up to an unavailability of the exact kind of games he finds to be interesting.

Tellingly, the games he lists as being influential to his modding work in Arma 2 include Black Hawk Down and America’s Army, which are both games in which realism often takes precedence over gameplay convenience. Ammunition for weapons must be closely followed, bullet physics are modelled in line with the real world, and death during a multiplayer round means the player is dead. That’s it. No second chances, no miraculous recovery from one’s downed state as is popular in many arcade-influenced shooters.

It’s little surprise Greene went on to create a game that adheres to the ideology of mistakes being permanent and having a very real, immediate effect on how the rest of a game’s round plays out.

A quick look at PUBG

If you aren’t familiar with the game already, some of Greene’s influences might as well be incomprehensible gibberish. Thankfully, the game’s core concept is fairly simple: 100 players are airdropped onto a sizable island, parachuting down to points of interest across the map of their choosing, and scavenge abandoned landmarks and buildings for guns, ammunition, vehicles and protective gear. The goal of an average round is to be the sole person left alive, enforced by a slowly-shrinking ring of play that slowly cuts down the island’s size to a small ring where players fight to congregate and eventually win or die.

It’s an intense experience that involves tactical movement, tenuous alliances with strangers, solid shooting skills and a bit of luck. The game’s appeal is obvious, given how it’s recently cleared 3 million concurrent players and its numbers only seem to continue rising.

There are several popular theories as to why the game is popular, personal preferences aside: The ease of joining a game and its streamer-friendly nature. Many multiplayer games are lucky to maintain a player base that allows the immediate joining of random games via matchmaking. Even the heyday of Halo meant dealing with waiting in lobbies and hoping for solid matchups, but getting into a game of PUBG is lightning fast any hour of the day or night. This means losing isn’t as much of a punishment, as players can just hop back out to the matchmaking lobby and dive into another game.

On top of this, PUBG seems almost made for Twitch streaming. The mental chess that goes into surviving a match plays out differently almost every time a player boots it up and the natural downtime of death means streamers have plenty of time to interact with their fans and show off their natural charisma without detracting from the game at hand. 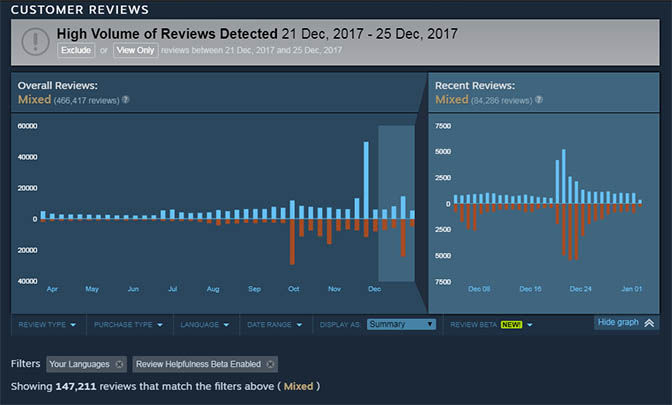 Unsurprisingly, there’s no faint amount of praise for PlayerUnknown’s Battlegrounds among the gaming press. Its popularity is obvious and critical reception is fairly strong with or without the bias of the game’s hype to drive it, yet that very same popularity seems to be its overall downfall when it comes to user ratings. Steam reviews are mixed with most of the game’s criticism pointed at its numerous bugs.

These bugs are well-documented within the community and have been covered extensively across multiple outlets. It’s a game based on a mod created by a man without formal game design training and several remainders of that mindset still remain. Even the full retail release of PUBG has done little to address some of the longest-standing bugs in the game’s code despite an office of nearly 80 individuals working on the game at any given time.

To that end, asking if PUBG is a solid experience isn’t as simple as equating popularity to quality. It delivers a certain experience reminiscent of the film Battle Royale or The Hunger Games to an audience that has been deprived of a coherent example of a video game adaptation of these movies for a surprising amount of time. Minecraft offered something in the same vein, except in the style of a digital representation of LEGO made accessible to those without physical kits. It’s an adaptation of something new to a certain audience, even if other hobbyists have seen it before.

That’s not a bad thing. If anything, freshness is PUBG’s strength. Judging how popular it will remain over the long term isn’t easy and yet its popularity has continued to rise throughout 2017 and on into 2018. Maybe it’ll top Steam’s charts for a few years or it might be replaced by the next new and shiny toy to pop up on the horizon. No matter its fate, PlayerUnknown’s Battlegrounds has left its mark on the gaming world and should remain a hot topic for popularity studies for some time.