Share this guide
COPIED!
Sega's sudden announcement regarding the upcoming release of the Mega Drive Mini may seem outlandishly overblown.

Sega’s sudden announcement regarding the upcoming release of the Mega Drive Mini may seem outlandishly overblown, considering just how many miniature Mega Drive consoles already exist in the impulse buy section of every marketplace that carries housewares. That’s not to imply the Mega Drive has any lack of popularity, but rather that the constant manufacture of these re-release consoles has watered down the impact of the announcement.

That’s also not to say there is a lack of demand for a modern re-release of the Mega Drive featuring proper software emulation. Brazil, for example, has a long and storied history of nostalgia for the console with a reported sales of 150 thousand consoles a year as of 2016. Sales numbers that large for a console released in 1989 are a rarity and Sega seems acutely aware of this fact.

One can imagine there are similar reasons for the constant stream of Mega Drive clones across the world distributed by a handful of companies. Since 2009, ATGames has licensed the rights to manufacture these clones and sell them globally under different distributors, but the hardware remains largely the same even as the outer shells change throughout the years. Some offer wireless controllers or HDMI output to keep up with the times, but most of them have one minor detail that keeps them from living up to the level of the NES mini: They’re not very good. Frankly, there’s no excuse for them to be as poor as they are considering a Raspberry Pi and some tinkering on your behalf could leave you with a better emulator than something with official Sega branding on it.

While the history of emulation is more nuanced than a short paragraph could ever hope to distill properly, emulating classic consoles is not a new concept by any means. Most any handheld device from the PlayStation Portable and up can be finagled into running Mega Drive era games with various levels of success. 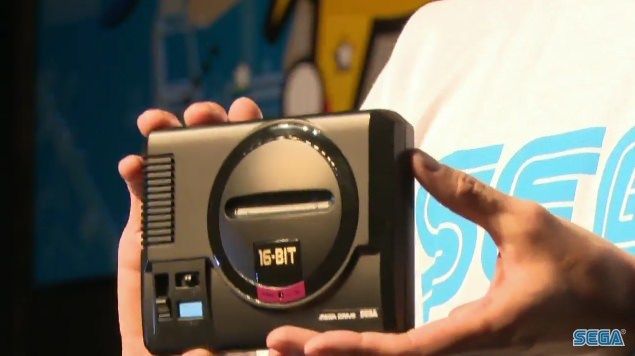 PC emulators for the same consoles have been freely available and legally dubious for literal decades, with many of these projects taking special consideration to implement code that allows for certain titles to play on terribly under-powered systems. Not every game gets this treatment, but if you load up a Mega Drive emulator, chances are you’re going to end up playing Sonic the Hedgehog at some point, and chances are that emulator is built to handle that game even if you play it on a Tamagotchi you found buried in your closet.

Unfortunately, these clone machines are shoddy enough that it takes physical hardware fixes just to make the audio sound right. Wasn’t sound quality one of the biggest advantages the Mega Drive had over Nintendo’s consoles of the time? Why is it being ignored now?

So when ATGames releases a Mega Drive in 2017 that is incapable of emulating the system’s flagship title at a consistent framerate, one is left to wonder just how much they care to deliver an experience that is actually pleasant to the consumer. If you’re wondering why this should be an issue, Sega has announced the official Mega Drive Mini is going to run on ATGames hardware and software much like its cloned brethren.

ATGames states the technology used is new and improved, but the Flashback HD showed just what “improvement” could mean: Barely acceptable for its price point. Maybe Sega will step in and request tighter quality control but it’s a little too early to cross your fingers. With a release date of a vague 2018 entry with no confirmation of a US or UK release, you may be better off buying a classic Mega Drive and wheeling an old television out of storage. At least it’ll sound right.

Return to Your Retro Roots with the Switch Online

Will Sony Release Thier PS5 Soon?

Nintendo Doubles down on Mainstream Appeal Instead of 4K Focus