Share this guide
COPIED!
Now that the newly re-christened Wolcen Studio has had a few years to work on their debut title, it feels like a good time to give a full and proper look at the game's current state as well as what it promises to achieve in the future.

More of Gaming
Your Guide to Getting the Perfect Hardware for Gaming8 Tips to Become Better at Video Gaming5 Easy Ways to Start Earning Gold in Old School RuneScape5 Tips for Beginners in Escape from TarkovWhen Is Buying a Mid-range Gaming PC vs Building One a Better Choice? See more

Back in early 2016, a small French gaming studio by the name of SolarFall Games launched a Kickstarter campaign for their first foray into the gaming world: A hack-and-slash action RPG going by the name of Umbra. Promising a Diablo-style experience with its own twists on a decades-old formula, Umbra caught the public’s eye and managed to raise a respectable $400 thousand dollars against their original Kickstarter goal of $225 thousand, safely boosting them into the middle of their stretch goals and securing the game’s development for the coming years.

The only catch? Umbra is a copyrighted name that required a last-minute change, leading to its current title of Wolcen: Lords of Mayhem. If you thought the Kickstarter success story sounded familiar yet the name threw you off, chances are that’s why.

Now that the newly re-christened Wolcen Studio has had a few years to work on their debut title, it feels like a good time to give a full and proper look at the game’s current state as well as what it promises to achieve in the future. 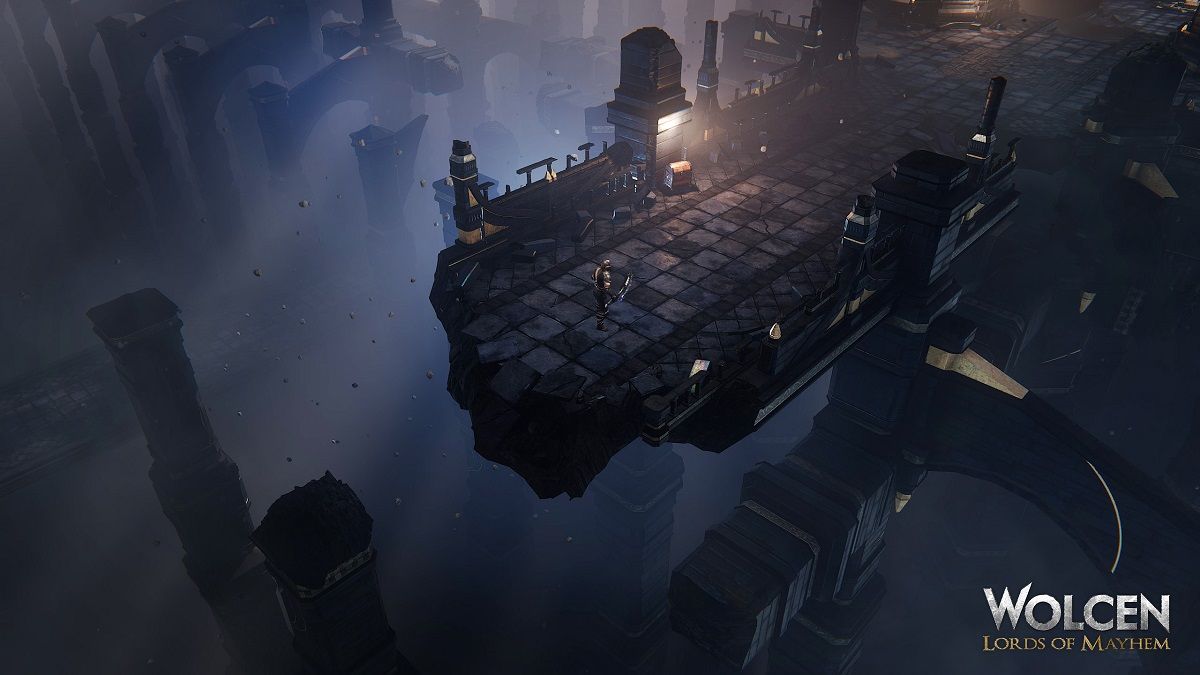 Admittedly, it feels like every game is angling to gain a title somehow linking it directly to the popular Souls series, now very well known for its difficulty and methodical plotting required to advance at any reasonable pace. Wolcen actually has some claim to the comparison through its mechanics more than its visual style, though early glances at some of the game world’s architecture does hearken back to the dark, gloomy atmosphere present in its distant cousin.

Its Dark Souls influence chimes in with a stamina-based combat system which is rare for the action RPG genre, requiring you to conserve energy throughout your combat encounters to ensure you can dodge, retreat or exploit openings in an enemy’s defence at appropriate moments.

It can more easily be compared to Diablo or even Path of Exile, thanks to its isometric action RPG stylings with inventory and skill tree systems that seem fairly similar to the predecessors of the genre. It steps away from this formula through the addition of its own tweaks on a well-trodden formula. Character customisation marks its first departure from the norms of the genre short of Torchlight and its future addition of a pet system seems to have taken inspiration from the same source, but its free-form and largely classless approach to its skill tree with multiple branching paths draws very heavily from Path of Exile.

Customising one’s character seems to be front and centre of the developer’s mind, especially with how they seem to be tailoring the world to react to user input. Environments may not react to everything the player has at their disposal, but the foundation for a reactive environmental system is already in place. Fire spells will spread wildly without a source of water or ice to stop them in their tracks or you can toss a lightning spell into a pool of water to spread its damage and stun capabilities through entire groups, for instance. Later updates tease the release of a unique form the player’s character can take to further enhance their abilities and open new ways to interact with or entirely avoid elemental hazards.

The present and future of Wolcen development If the lure of another action RPG is enough to pique your curiosity, there’s already good news: Wolcen is available as a part of Steam’s Early Access program and you can try it out immediately. While the Early Access branding might feel like a curse to some, Wolcen has been under steady development for the past two years and significant steps to implement promised features are freely available for you to review. It’d be surprising for the game to suddenly lose update support short of Wolcen Studios vanishing, but public support has been strong enough that its disappearance seems highly unlikely.

Monster density, new enemy types and skill tree additions are just a small part of the game’s most recent updates from the past few months, with their projected 2018 roadmap promising some very large jumps in content, namely in the realm of crafting and multiplayer capabilities. Trello hosts their live progress tracker so you can keep a closer eye on features that may make it into the next patch as they happen and it’s a shame so few companies take advantage of the feedback a live update map can provide.

This year’s lineup of RPG titles is already dauntingly solid, with games like Monster Hunter World already launching to high praise and critical reception, yet there seems to be a distinct lack of classic isometric hack-and-slash entries on any given list of anticipated titles. Wolcen is on a steady course and very well may scratch your itch for loot-hunting goodness, making it very much worth keeping an eye on.

PlayerUnknown’s Battlegrounds and the Power of Popularity

Destiny 2: Launch Details and What to Expect

Update 0.5 Has Arrived for Wolcen: Lords of Mayhem