Share this guide
COPIED!
Google has launched its brand new smartphones, Pixel 2 and Pixel 2 XL and they are going to be a boom in the tech industry.

Google has launched its brand new smartphones, Pixel 2 and Pixel 2 XL and they are going to be a boom in the tech industry. With the latest Snapdragon 835 processor from Qualcomm, 64GB of storage, machine learning supported 12-megapixel cameras, front-facing speakers, and applied AI, Pixel 2 is the ultimate Android challenge for Apple’s iPhone.

This new line of high-end smartphones will employ the Android Oreo operating system and it is set to reaffirm Google’s masterful ability to combine hardware and software. It will use exclusive features that will go one step further than its main competitors, including Apple.

One thing that Google was intent on doing is developing a smartphone that would offer the same features both in the standard version and the XL version. No longer do users have to choose between screen size and specialized features.

“You get all the goodness with both phones, so the only choice you have to make is what size you want.”, said Mario Queiroz, Vice President Product Manager at Google. This was specifically targeted at Apple, whose iPhones have always made users notice the difference between screen sizes. 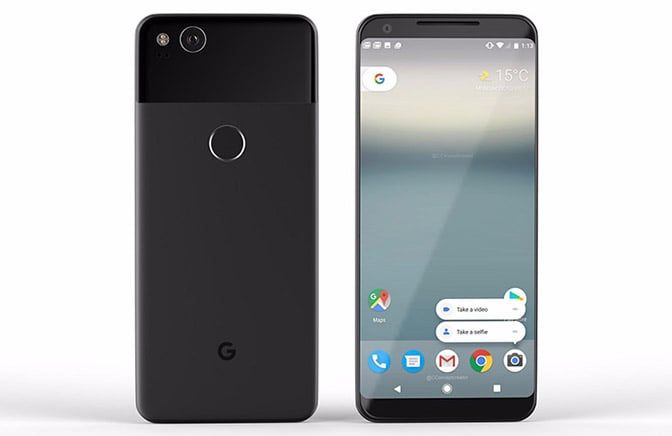 But it’s not all about screen size when it comes to Google’s Pixel 2 and Pixel 2 XL. The state of the art smartphones also have pressure-sensitive sides that launch the Google Assistant upon being pressed. This actually came as an improvement to the company’s AI assistant wake phrase. “Ok, Google” may have sounded terrific in the plans, but as it turned out, people were not all that excited about repeatedly saying the phrase in public.

Aside from the silent Google Assistant launch, the new generation of Pixel phones also comes with a 10% longer battery life. Moreover, Google has actually focused on developing an extra-fast charging system, which has been implemented in the Pixel 2 phones. According to Christiaan Prins, Google’s Product Manager, charging the phones for as little as 15 minutes can supply up to seven hours of use. Procrastinators, be advised that based on this feature alone, the Pixel 2 is best possible smartphone out there.

The Outstanding Camera in the Pixel 2 / Pixel 2 XL

If what you know so far is not worthy of a pre-order, then let us tell you about the spectacular camera on the Pixel 2 and Pixel 2 XL, of course. Google calls it “the best smartphone camera, again” because it uses the optimized version of its HDR+ computational photography technique. This means that the new Pixels can take several images and produce one single shot based on them that will be the far superior to simple shots.

And wait! There’s more you need to know about this spectacular camera. It also has optical image stabilization, which is available not only for pictures but also for video. This is one of the features that will set the new Pixels apart from most smartphones on the market. And if all of this were not enough, the camera on the Pixel 2 will use the new dual pixel sensor system, which together with the HDR+ can lead to images of impeccable quality.

It remains to be seen whether Google’s Pixel 2 and Pixel 2 XL can finally surpass the iron popularity of Apple’s iPhone. But what is absolutely certain is that with its superior camera, smooth AI implementation, and stellar charging system, Google’s new smartphones are going to take the tech world by force.